There is beautiful blue sky today, but only a little blue in my latest quilt projects.  That’s okay, because I’m working on a new little blue project for next week.  It’s very simple except foe the amount of ripping involved.  So it’s not ready for you to see,until next week.
I just completed a really cute flimsy, the Fence Rail Star quilt by Jenny Doan at MSQC.  I loved its size, about 42 inches square, and the deceptively easy pattern.  I found lots of colorful jelly roll strips in my kids theme stash, so it used lots of one of a kind strips and lots of color. 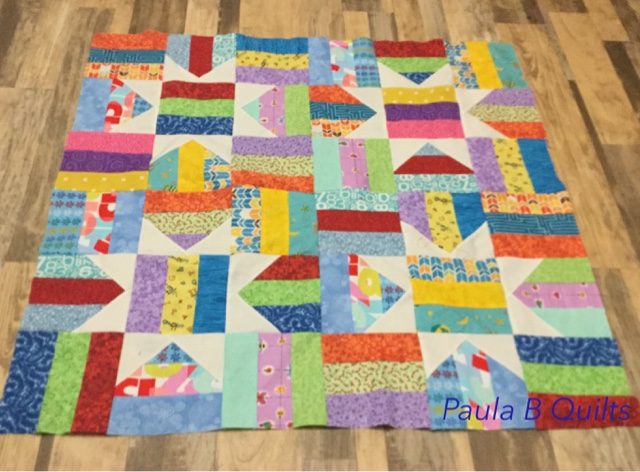 After completing the rail fence blocks I took a photo of the entire layout.  I had to refer to it constantly to make sure they twisted and turned properly.  Even when I finished it I saw a glaring mistake.  Fortunately, the lucky little one won’t know the difference.  It does have monkeys in it and that’s what counts.  It still needs a white border.  However, I really was lucky to find the perfect backing in my stash. 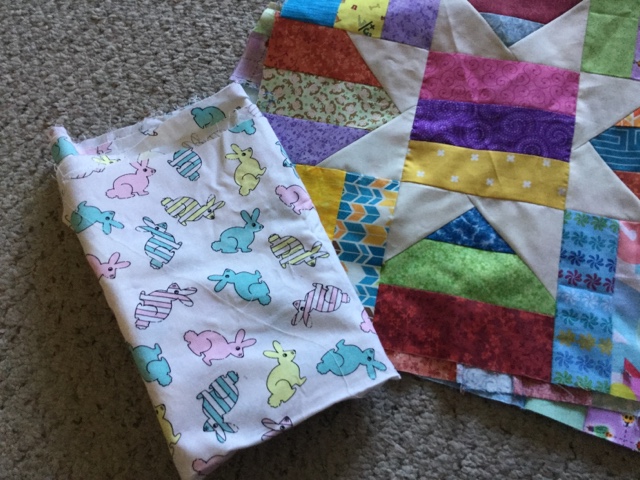 Monkeys plus bunnies makes it really perfect for snuggling.
GENTRIFICATION
On Tuesday I published the result of my Ad Hoc Improv Quilts Challenge Two on Ann’s blog, Fret Not Yourself. The challenge was to combine two different blocks into one quilt. I had eight blocks of little wonky houses which I had made using the stack and Whack method.  They were not done with any purpose in mind but just to try out the method.  They were cute and colorful and easy to make but I need to something to contrast with them.  So I got out my ugliest dirty looking scraps and improv pieced them into 8 inch blocks to match the little houses. 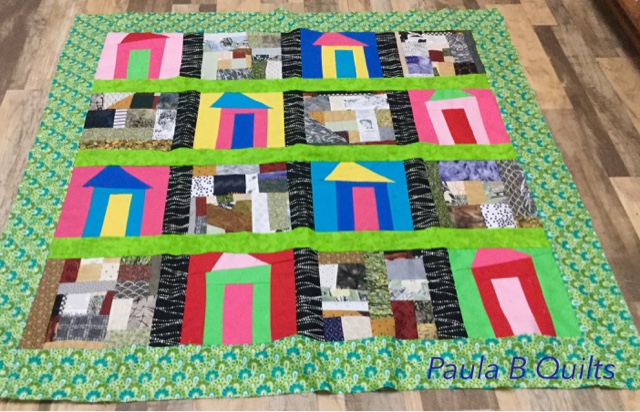 My inspiration came by chance.  In June I happened to see an MSNBC interview of Richard Florida who has written a book about gentrification called  The New Urban Crisis.  In several large cities like New York rundown buildings have been bought cheaply and refurbished.  The neighborhoods became more desireable with the addition of new restaurants, boutique shops and an influx of more affluent tenants.  This caused real estate values to rise dramatically, making rents unaffordable for former tenants who were forced to move away from their homes, jobs and way of life.  Thus more inequality,  segregation and poverty have resulted.

This dilemma is what I have attempted to show in my quilt.  It’s represented by the contrast between the new houses and the empty lots.  The black strips with “fencing””  divide the blocks along their sides, and the lime green strips represent the bright new face of the neighborhood.  I’m going to add  more to it for the third challenge.
So that was my busy quilting week.  I appreciate Angela’s and Cynthia,s faithful linkups every week so we can share what is working or not working for us with friends who understand.  Check it out at RSC17 at soscrappy  and
Oh, Scrap! at