In January I had no idea what to do for the Chinese coin challenge.  I love working with  bright colors and have made a lot of Project Linus kids quilts.  I decided to challenge myself by working with neutrals.
For convenience I turned over a narrow framed canvas to the back side.  This provided a rough surface, non-slip, and a rim to hold the pieces when I move it around.  It was my design tray for the coins.  I planned to do just a wall hanging size.  The first set of strips in neutrals stayed untouched for a few days.  I was so bored with it and totally uninspired.
I decided to do black and white mixed prints, which made it more interesting but still it sat there.  So I tried out a soft teal strip of Grunge down the center. 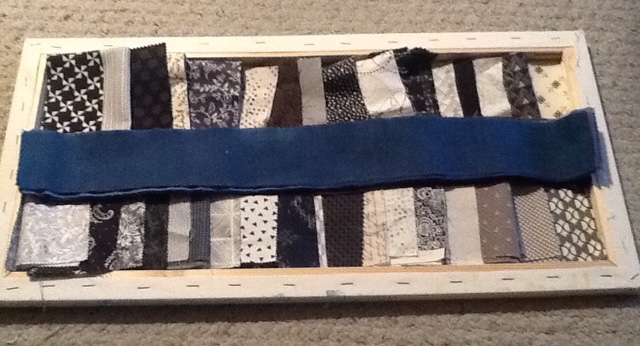 Nothing was stitched together yet.  It just sat and stared back at me now, for about two weeks.  That was January.
One day I recalled another challenge I was planning to do about six years ago.  It was making a small wall hanging for a very worthy charity. The pieces were then auctioned off.  I had an inspiration for a theme and collected fabrics to make it.  Just as I was going to start cutting them, the group announced they were discontinuing the auctions because they had met their fundraising goal. Wonderful for them, but I was left with an idea and nowhere to go with it.
The coin stack now became the basis for my original idea, but in a totally different form.  I had been given a pile of dull colored strips from someone who had been doing retro quilts.  The challenge now became to use these dull fabrics to express my vision.
Here was the first layout on the tray. 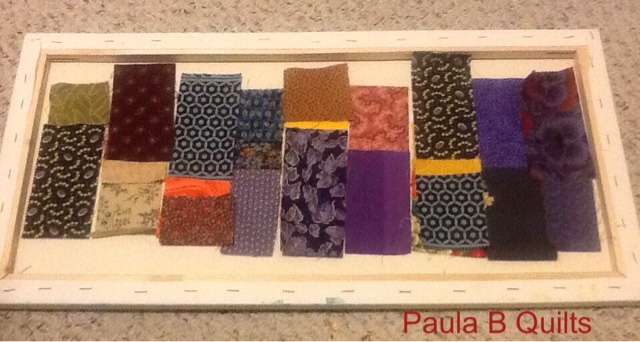 At last I was on the way, began to fill it in and actually started piecing it after only six weeks of nothing.
Here is the basis of the project. I finished piecing this so far.  I have some more borders to add before quilting and binding, but now I’m on a roll. 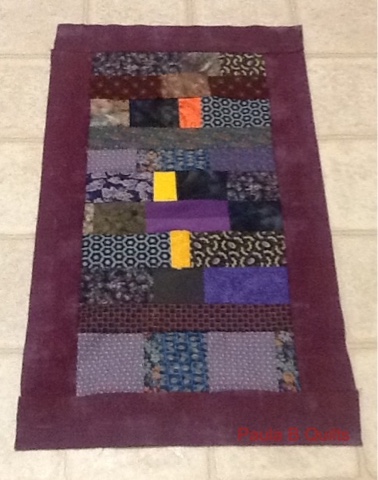 Do you have any ideas about the theme I am working on?  I’ll let you know at the end of the challenge. See you at the end of March.
I’m very happy to be linking up with Ad Hoc Improv Quilter at Ann’s blog, Fret Not Yourself.  Please check out the fascinating things shared there by really talented people.

Leave a Reply to patty a. Cancel reply