PINWHEELS BLOWING IN THE BREEZE

It has been sunny with a lovely breeze lately and it has put me in the mood to finish my Rows of Pinwheels quilt top.  I completed attaching the rows together and was done sooner than expected. 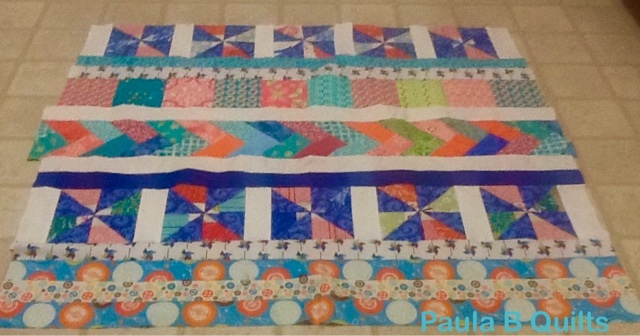 After this photo was taken I got the sides trimmed up and am working on a plain white border. I have no idea what to use for backing because I intend to do a second version with the extra pinwheel blocks, so I want to use the fabric on hand for that first. It will be the same color scheme, so my orange and blue scraps will still be around.
As for my Modern HST Sampler block called Faceted Stripe, it called for a single color plus background.  I found another beautiful Wiliam Morris green leafy fabric with stems in lavender shades. So I chose to add a lavender dot print down the center instead of white background. 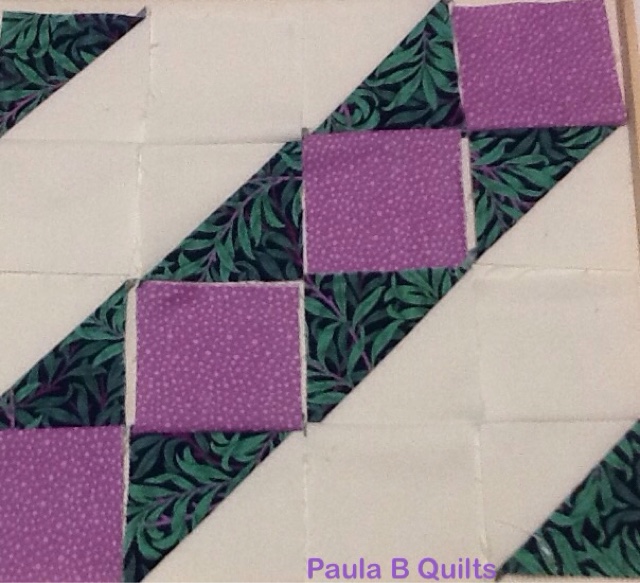 I still need a lot more practice.  While just joining units of two, I had to rip five seams, and this is as far as I got.
However, my friend Sharon arrived from Seattle and we will be having a wonderful reunion as soon as she arrives from the airport. Don’t expect to have much stitching time this week.  We will be showing her the sights here in Monona and Madison.  The weather is supposed to cooperate also.
I hope all of you have a great week.  I’m linking up with Rainbow Scrap Challenge at soscrappy and Modern HST Sampler at Blossom Heart Quilts