In the box of scraps, which my daughter gave me two weeks ago, I found more interesting scraps from the past. 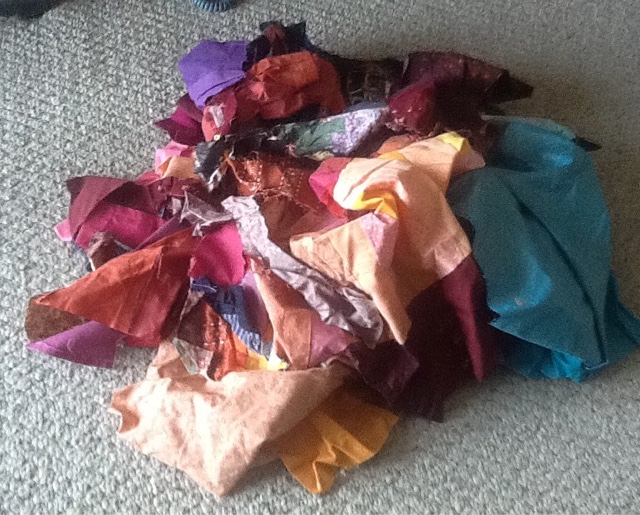 I’ve already shown you the Strips that Sizzle blocks, which I finished piecing together. I’m setting it on point and was trying out some background samples. 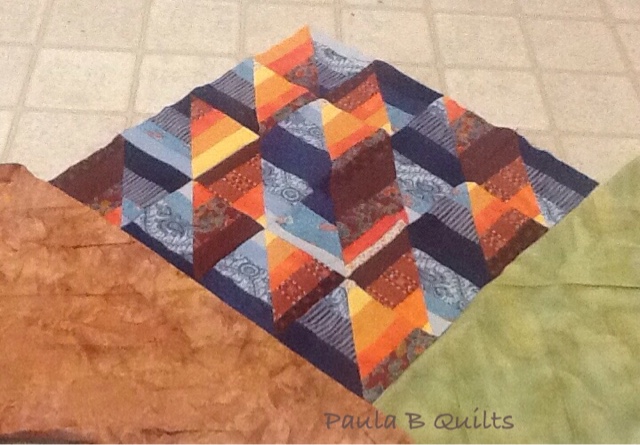 I think the earth tones set off the blues and brights nicely and also tie in with the Southwest idea.  Since I don’t have enough fabric for a single piece, I shopped online (for a project, not just for fun). At Hancock’s of Paducah I found a nice batik on sale, from among their HUGE inventory.  Hoping it will work.  If it is too bright, I could tea die it.
The major content of the box was a sheet design wall from the 1990’s, which was my attempt to portray the Red Rock country near Sedona, AZ.  It became too large and lost focus, so I ripped up the sections like the one below. 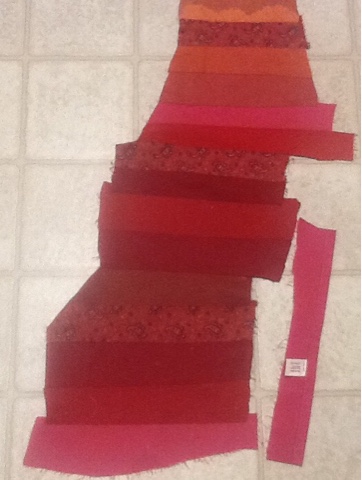 The labeled strip beside it was from the hem of a JC Penney rosy sheet.  You can see the same fabric near the top and at the bottom of the cliff.
Coincidentally, my granddaughter Sarah has been working on a sewing project for a dramatic skit.  She had to make a bridesmaid dress for herself, with Beth’s expert help.  (Beth won a sewing contest at age 14 and made many bridal party dresses, including her own in 1994).  Sarah then had to teach her two friends how to sew their own dresses. So the sewing skills are being passed along.
I was so surprised and pleased to see this sweet photo of Sarah in her dress. 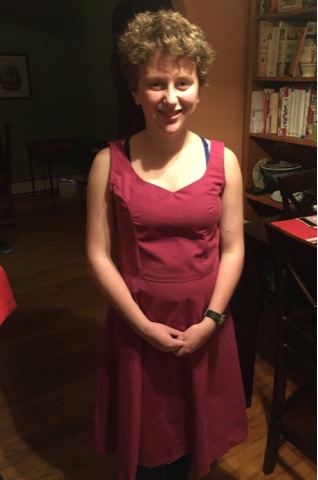 Does the fabric look familiar?  Yes, the three dresses were made out of my two old rosy sheets which came out of the same box.  Coincidence?  Who knows?  I have no recollection, but the proof is in the fabric.
On Monday I will receive instructions for the second block of the Modern HST Sampler.  That will add to my blue and purple blocks for RSC16.
I link up with RSC16 at soscrappy and Monday Making at Love, Laugh, Quilt.